A team of African American Businessmen and women have joined the campaign to fight the increasing school dropout in Uganda.

The team from Capital Brand Biz led by Michael Broughton, Mark A. Hernandez Sr and Damiano as well as Veronica Gold Smith from Impact Brands Inc have partnered with Girl Child Initiative Uganda (GCIU) a registered Community Based Organisation (CBO) in Wakiso District that champions the right to Education of children especially the girl child so as to reduce on the school dropout rate.

The group that was ushered into the country by East African Partners Managing Director, Isaac Kigozi gave out scholastic materials to the needy children at Prainet Academy Nursery School located in Kabaganda, Nangabo Subcounty in Wakisao district which is run by Girl Child Initiative Uganda (GCIU). 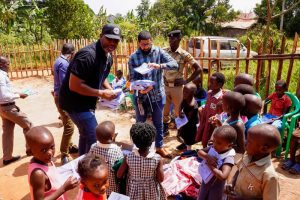 GCIU Executive Director, Nixon Segawa appreciated the generosity extended to the children whose future would be in jeopardy in case their education is not guaranteed.

“The future of every society lays in educating the young generation, it has however become too expensive to maintain a child in school due to the heavy fees involved among other factors. This has led to increased dropout,” Segawa said.

“We decided to set up the school to offer education to children whose mothers dropped out of school after getting pregnant. These mothers have limited or no capacity to sponsor their children so as to achieve the desired education,” Segawa added.

He noted that the support from the American investors comes to supplement efforts to fighting the social-economic challenges such as poverty, ignorance, poor parenting, girl marriages which hinder children from accessing education. 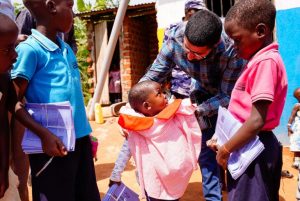 “Thanks to the Managing Director, East African Partners, Isaac Kigozi for the support he has always rendered to Girl Child Initiative Uganda (GCIU),” Segawa added.

Reports from the United Nations Educational Scientific and Cultural Organisation (UNESCO), Uganda has the highest school drop-out rate for females in East Africa.

The drop-out rate in the country is at 42.8 percent with over half of the number of female pupils that join primary not completing.

Mark A. Hernandez Sr, the Director of Business Development at Capital Brand said that it is always everyone’s responsibility to give back to those who are in need.

“It is a pleasure to have the opportunity to give back a bit today with Capital Brand, Its all our responsibility to care for one another, thanks to Girl Child Initiative Uganda,” Hernandez said.

The Managing Principal at Impact Brands, Veronica Gold Smith noted that educating a girl child is instrumental in empowering any given society.

“This is so powerful, these young women are being empowered through education which will enable them be the kind of women who makes other women want to up their game. We appreciate Girl Child Initiative Uganda, continue with the tremendous noble work,” Veronica said. 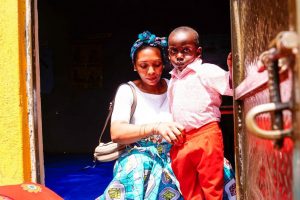 Michael Broughton appreciated GCIU for offering education to the young generation and ensuring that they take care of the dropout mothers through offering them skills in Hair dressing, Tailoring and fashion design among others.

“I am so impressed by what you people are doing, the service you offer is much needed and you should go on; educating the next generation is a guarantee for a brighter future,” Michael said.

‘I was bullied in school because of big lips’ – Lucky Mbabazi

Declan Rice is sold at £100m by West Ham

Akon’s Wife Rozy in Uganda to Invest over USD12M in Solar, Entertainment

‘I was bullied in school because of big lips’ – Lucky Mbabazi