Speaking at the launch of a mass cassava growing project in Acholibur sub county in Pader district on Saturday, Museveni said cassava is a great source of food and contributes to the food security of households.

The Acholibur Parish Project [APP] initiated by the Archdiocese of Gulu under the stewardship of Archbishop, John Baptist Odama aims at commercialising cassava growing within and outside Pader district.

The president said despite the food value of cassava, the crop is also used for manufacturing medicine, animal feed, petrol and Bio-fuel for cooking stoves. But Museveni said for cassava growing to thrive, farmers must be calculative to enable them gain maximum profit. 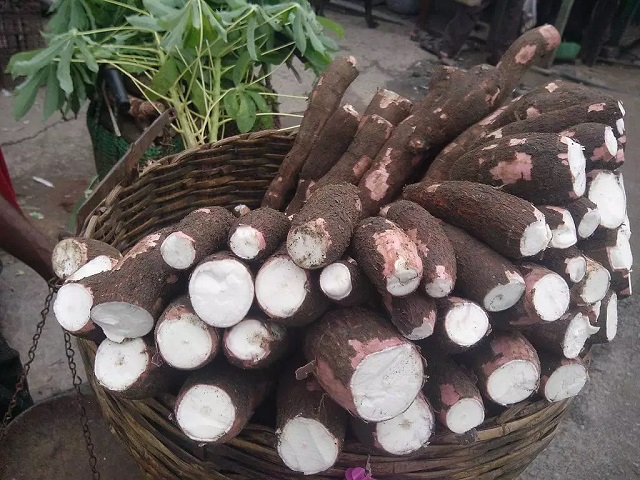 Museveni noted that Uganda’s breakthrough in commercialising cassava growing was crippled by the British colonialists in the past that emphasised only commercial farming of cotton, coffee, tea and tobacco underscoring the financial potential of cassava.

He lauded Archbishop Odama for the initiative of cassava growing in the region and encouraged local farmers to embark on large scale farming to reap more profits. The president also commissioned a mini-irrigation scheme at Aringomone Omuny-turubuc village, latigi parish in Latanya Sub County that was set up by the Water and Environment Ministry in partnership with Acholibur parish project.

He said the project is a good move towards shifting farmer’s dependence on rain to reliable water supply for all year round farming. Archbishop Odama in his speech said the holistic approach of cassava commercialisation and industrialisation in the region will promote the farmers towards achieving improved livelihood in the near future.

He lauded president Museveni for his promises to support the region with more factories for processing cassava citing it’s a commitment the government has continued to show towards projects initiated by the church.

Vincent Ssempijja, the Minister of Agriculture, Animal Industry and Fisheries says government is expected to budget for the project this financial year.

Bukona agro-processors ltd, a cassava starch based distillery in Nwoya District that uses cassava as raw material has signed a memorandum of understanding to purchase tons of dry cassava cuttings annually from farmers under the Acholibur parish project.

The factory will use cassava to manufacture ethanol, a bio-fuel that is expected to be promoted as an alternative source of fuel other than wood fuel that has seen depletion of forest covers. The Acholibur Parish project, a church based organization as started in 2017 under the trusteeship of Gulu archdiocese with at least some 10,000 farmers.