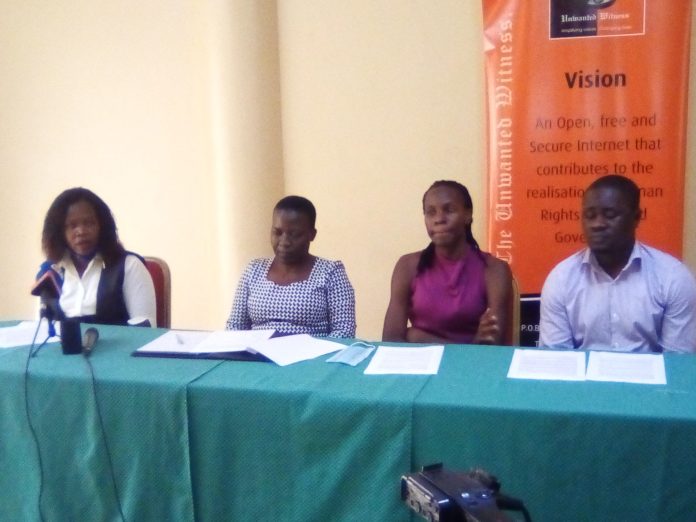 On December 9, 2020, Government through Uganda Communications Commission (UCC) wrote to Google Inc, that owns YouTube, a global video sharing platform, asking them to close 14 channels for allegedly mobilising riots that resulted into the death of more than 40 people and left several others injured last month.

Addressing the media in Kampala, Unwanted Witness Uganda’s Legal officer, Allan Ssempala Kigozi said Google should disregard the request by government since it intends to further silence dissent during the general elections campaigns.

Ssempala said that the organisations are concerned about the spirit, timing and intention of government and want Google to route the authority’s request through legal comiance processes and assess it’s validity under relevant haman rights standards with the view to protect the Uganda people and their rights.

“We find that the Ugandan government request for blocking access to YouTube goes contrary to a number of it’s human rights commitment and violates rights and freedoms of conscience, expression, association and access to information guaranteed under Article 19 of the Universal Declaration of Human Rights, Article 9 of the African Charter on Human and people’s Rights and Article 20 (1), 27 (2), 29 (1) and 43 (1) of the Constitution of the Republic of Uganda,” Ssempala said.

Ssempala said that while under international freedom of expression standards, blocking may be permitted by law, this measure should only be imposed by the courts or other independent and impartial adjudicatory bodies.

He noted that if Google doesn’t contest the request by government, it would have participated in a direct attack on freedom of expression and democracy ahead of the Uganda’s 2021 general elections.

However, Google Inc. has since written back to the government of Uganda asking her to present a formal Court order to that effect.