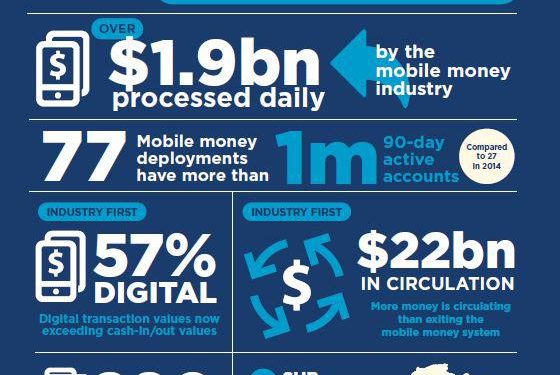 At least $ 2 billion was transacted everyday through mobile money platforms globally, a report has noted.

The State of the Industry Report on Mobile Money’, is produced by GSMA, an organisation which represents the interests of mobile operators worldwide, uniting more than 750 operators and nearly 400 companies in the broader mobile ecosystem.

For the first time, digital transactions represented the majority, 57 per cent, of mobile money interactions according to the report.

“The industry is witnessing increasing user trust and relevance. With 290 live services in 95 countries and 372 million active accounts, mobile money is entering the mainstream and becoming the path to financial inclusion in most low-income countries,” the report notes.

For consumers, this marks a shift away from cash towards digital payments — for school fees, e-commerce, international remittances, savings, credit, pay-as-you-go utilities and more. “Increased mobile connectivity and innovative services such as mobile money are building stronger and more inclusive communities,” said John Giusti, Chief Regulatory Officer, GSMA. “Surpassing one billion mobile money accounts represents a major milestone for an industry that did not exist just over a decade ago. The reach of mobile money agents is now 20 times that of bricks-and-mortar banks.

Yet the report notes that almost 1.7 billion people remain financially excluded, but the collective strength of the industry holds the potential to ensure that everyone can be part of the new digital economy.”]

The report notes that the digitisation of payments has reached new heights with digital transactions representing the majority of mobile money flows (57 per cent) for the first time in 2019 (historically, majority of transactions were cash-in and cash-out).

The report explored the empowerment that comes with owning a mobile money account, for example, it was discovered that more women are using financial services, low-income households are accessing essential utility services, and smallholder farmers are getting paid more quickly and conveniently.

Meanwhile, the report noted that millions of migrants and their families are experiencing the life-changing benefits of faster, safer and cheaper international remittances, and humanitarian cash assistance is being delivered more thoughtfully to those in crises.