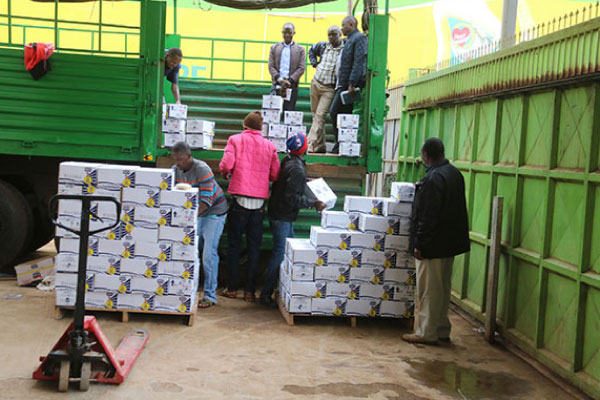 President Yoweri Kaguta Museveni says he is not worried after Kenya seized Uganda’s milk products on their market saying the rest of the world is there to buy the milk.

Addressing farmers and other business people in Kabarole on Friday, Museveni said he is not concerned with Kenya’s action because there is still a wide milk market across the globe that can take in Uganda’s products.

However, Museveni says with a population of Shs 42 million, if people understood the health value of milk the country would need about 8.8 billion litres a year which is far below the current production levels of about 2.5 billion litres.

The president also added that government has attracted an Indian investor who has built a factory in Lyantonde to intensify the production of casein from milk.

Casein is a family of related proteins commonly found in mammalian milk especially cows. It has a wide variety of uses including being some component pharmaceuticals.

The President said with such a factory in place it can consume all the available milk on the Ugandan market.

While farmers believe such a factory could be the ideal business for them, some had earlier called for expedition of talks between Uganda and Kenya in order to have an open market in the meantime.

However, Museveni challenged farmers to embrace value addition of their products. He said the problem with Africa is the use of unprocessed products which fetch less value on market.

Dr. Atim Apea, the Chairperson of Local Government Finance Commission called upon the political leaders and other partners to come together and create opportunities for growth. //Cue in: We have the policy…