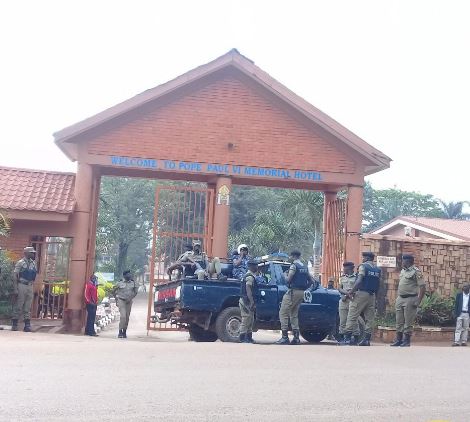 There is heavy police deployment at Pope Paul Memorial Hotel in Ndeeba where the People Power pressure group is expected to hold its consultative meeting. While hotel security personnel are around and working, police officers are also seen checking people and vehicles accessing the venue.

There are four police trucks, two parked close to the entrance and the other two in a radius of 200 meters on both sides. Last week, the “People power movement” leader and Kyadondo East Member of Parliament, Robert Kyagulanyi told journalists that he is ready to resume consultations on his presidential ambitions ahead of the 2021 general elections.

Kyagulanyi said he had written to the relevant authorities following a meeting with Electoral Commission after clashing with police during their earlier attempts to consult voters in various places in the country. At the time of the announcement, police hadn’t responded to the group.

Kyagulanyi started his consultations in January after receiving clearance from Electoral Commission. He however, clashed with Police on several occasions with the latter accusing the group of holding illegal assemblies. Police had issued guidelines to the group, which included a ban on processions during the meetings, something they disagreed on.

People Power decided to halt the consultations. The Commission held a meeting with Kyagulanyi and Police where new conditions were set and they agreed that consultations continue. According to Police, all presidential hopefuls must present clearance of the venues they intend to use for their consultations, the number of people they expect and other arrangements.

Police also guided that the meetings be held indoor and no procession is held. The Kampala Metropolitan Police Spokesperson, Patrick Onyango declined to comment on the situation at the hotel and instead referred URN to his boss, Fred Enanga who didn’t pick his known number.

However last week, Enanga said Kyagulanyi hadn’t fulfilled the requirements. The People Power spokesperson, Joel Sennyonyi couldn’t be reached for comment as he could neither pick nor return calls from our reporter.