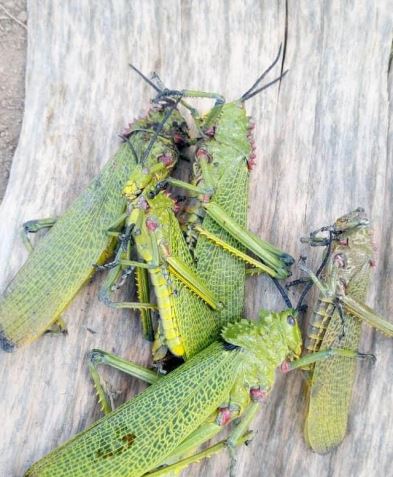 The strange insects cited in Masaka district are not the disastrous desert locust, according to findings by experts.

Early this month, a group of farmers from Lwega parish in Buwunga Sub County reported the presence of green bubble-colored and short-horned grasshoppers that were allegedly devouring their crops.

The presence of the strange insects triggered anxiety among farmers, with some of them suspecting that they had been invaded by deserts locusts.

Godfrey Ssenkaayi, a Senior Entomologist at Masaka District, says their analysis on the specimen of insects conducted alongside scientists from Ministry of Agriculture has ascertained that these were not the highly destructive desert locusts.

He says that the insects belong to the family of grasshoppers that are not under the species of desert locusts (Schistoceria gregarias) that are capable of causing substantial damage to plantations.

Ssenkaayi says they are also going to revisit sites were the insects were reported to access the level of damage the insects can cause or have caused to plantations before they can accordingly advise farmers on how to deal with them.

Mikadad Kajjumba, the Chairperson of Kitwe B village, one of the areas where the insects were cited said that the community was awed by the strange appearance of the insects, which prompted them to raise alarm.

He argues that although there hasn’t been any major damage to crops and plantations, the district production department ought to continue monitoring their growth cycle to ensure that all possible effects are mitigated as much as possible.