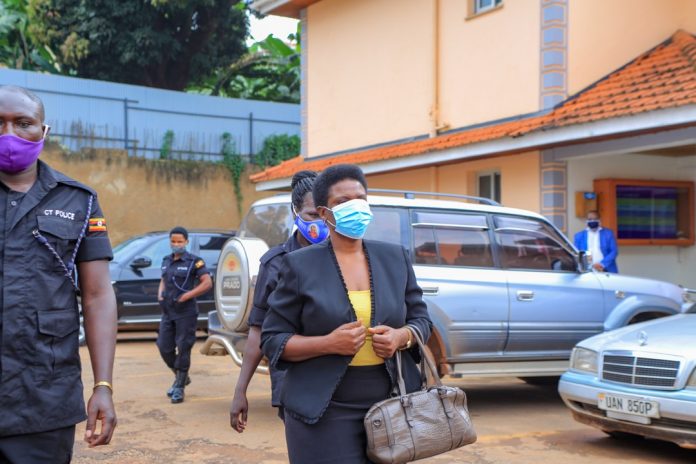 The Chairperson of Equal Opportunities Commission (EOC), Sylvia Ntambi has been granted bail by the Anti Corruption Court Chief Magistrate after spending days in Kigo prison over corruption charges and embezzlement of government funds.

The EOC boss was remanded to Kigo prison last week by the Court Chief Magistrate, Pamela Lamunu Ocaye, on grounds that the sureties she had presented were not substantial.

On appearing before Court via video conferencing on Wednesday morning, Court presided over by the grade one magistrate Moses Nabende granted Ntambis bail application and was thus released on a cash bail of Shs3.5m while each surety was to pay a non cash bond of Shs40m.

Court also ordered Ntambi to deposit her passport and land title with court a condition that one of her surety, Sylvia Namubiru the Executive Director of Legal Service Providers Network (LASPNET) found hard since the EOC boss is always required to travel abroad given her nature of work.

Ntambi will report back to court on 24th November for mention of her case.

Ntambi is accused together with the Secretary to the Commission, Mujuni Mpitsi, the undersecretary Sunday Nicholas Olwor, Monitoring and Evaluation Officer, Moses Mugabe, and Senior Accountant Harriet Byangire among others.

Prosecution alleges that between July 2018 and April 2019, Ntambi while sitting at the Equal Opportunities Commission offices in Kampala as the chairperson, neglected her duty of directing the affairs and administration of the Commission, thereby leading to gross mismanagement of the Commission Funds.