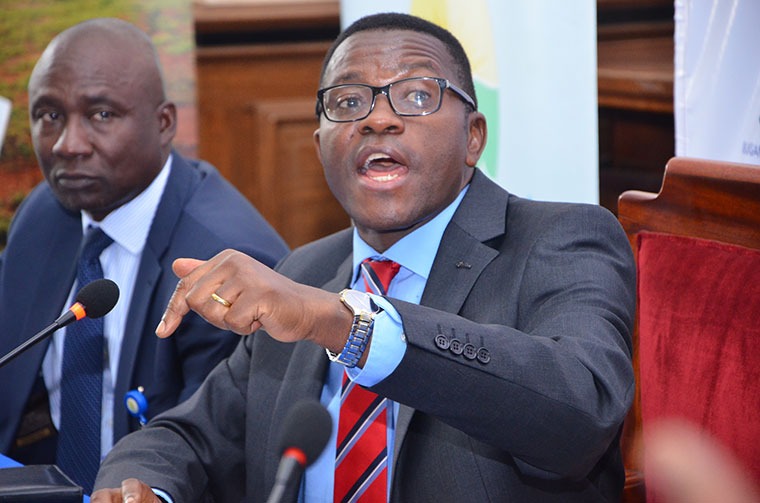 The Katikkiro of Buganda Charles Peter Mayiga has cautioned Ugandans against cryptocurrencies and other ponzi schemes, saying they are designed to defraud them. Speaking at the opening of the Buganda Lukiiko at Bulange Mengo on Monday, Mayiga said there is no shortcut to getting rich but hard work and perseverance.

“There are many people in Buganda who have been defrauded in cryptocurrency schemes. I want to tell you that anything that promises you abnormal profits in a very short period of time is always a hoax. You must avoid such deals,” Mayiga said. He added that rich people don’t make their money in months but rather years of hard work.

“You must have something of value you’re doing; you must be trading in something for you to get rich. If somebody tells you they can give you abnormal profits in just a month, know that they are fraudsters. What do they buy or sell that they get that money they give you in just months? Mayiga wondered.

His message comes on the heels of a recent cryptocurrency scam that saw thousands of Ugandans lose close to Shillings 100billion. Dunamiscoins resources Limited, a cryptocurrency company closed shop at the end of last year running away with member’s deposits.

The company, whose beneficial owners are four West Africans, started operations in January 2019 and had opened branches in different parts of the country enlisting hundreds of unsuspecting customers. Two of the Directors Samson Lwanga, 37 and Mary Nabunya 53 were recently remanded to Luzira Prisons as investigations into the fraud continue.

Mayiga also used his address to challenge President Museveni’s assertion that somehow Mengo and other big land owners were responsible for the increasing land wrangles and evictions in Buganda.

Speaking at three NRM functions last week; the National Executive Council on Friday at State House Entebbe, the National Delegates Conference on Saturday at Namboole Stadium and in Ibanda  district during the NRM liberation day, Museveni said, he’s not going to look on as land owners like Mengo abuse their powers and evict Bibanja holders.

But Mayiga said the biggest cause of land wrangles in Buganda is the weak police and court system that favors the rich against the poor, the interference by political leaders such as RDCs in land matters and the increasing population among others.

“Mailo land is not responsible for the conflict we have today. We have had mailo land since 1900, why is it that we are having conflicts now?” Mayiga wondered. He vowed that they will never accept any proposal that seeks to abolish mailo land.

“Justice Catherine Bamugemereire recommended in her interim report that mailo land be abolished because it was causing problems. We said she was wrong and gave her information to that effect,” Mayiga said. Bamugemereire was the head of the now ended Presidential commission on land disputes that carried out an audit on land wrangles across the country. It is yet to present its report to the president.