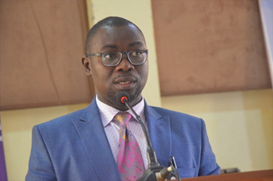 A whistleblower has petitioned the Inspectorate of Government (IG) calling for investigations and action against two members of staff of Kyambogo University who are accused of allegedly involving in corruption, fraud and financial loss to the University.

A petition who is protected by the Whistleblowers Act accuses Dr. John Okuonzi and Henry Tumusiime of swindling over Shs 79m every year for four years.

“I am writing reporting to your office the ongoing corruption, fraud and causing financial loss win bogus procurement. This is done by the Director Directorate of Information Communication Technology/DICTs, Dr. John Okuonzi and Mr. Henry Tumusiime with full knowledge of management,” noted the petitioner in the letter dated February 24th, 2021.

“Despite such arrangements, Dr. Okuonzi and Tumusiime continue to motivate for, initiate and conclude fictitious procurement processes for the same system which is done through a little know company called COMPUSOFT Uganda Limited,” the petitioner noted.

The petitioner alleges that in 2018 alone, there is evidence that the two caused payment of Shs 79, 200, 600 to COMPUSOFT company and this has been going on for so far four years.