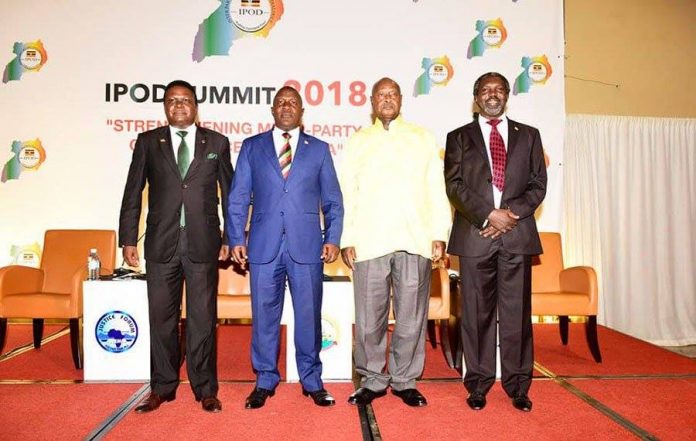 The Interparty Organisation for Dialogue (IPOD) is set to hold its 3rd summit this week and will be chaired President Yoweri Museveni under his capacity as the IPOD Summit Chairperson.

IPOD is an organisation that brings together all political parties that have representation in Parliament which currently include; DP, FDC, JEEMA, NRM and UPC.

The organization must organize a summit of heads of the political parties after every 6 months but this hasn’t been so due to a number of challenges including failure to raise quorum.

The summit shall be held at Kololo Independence grounds under the theme; Dialogue for National Cohesion.

While addressing the media in Kampala, the IPOD Council Chairperson who doubles as the NRM Secretary General, Justine Kasule Lumumba franked by Secretary Generals of DP’s Gerald Siranda, UPC’s Fred Ebil and JEEMA’s Mohammed Katerega noted that the summit will aim at handling the current political challenges that prevail in the aftermath of the 2021 general elections.

“The recently concluded elections were characterized by lawlessness, riots, misinformation and sectarian lines were drawn; as political leaders it is our duty to contribute to solutions to address the existing challenges at the time,” Lumumba said.

Lumumba noted that the summit will as well deliberate on issues of expanding democratic space in the country, upholding of the rule of law, enhancing electoral integrity, reviewing the role of security agencies in elections and upholding human rights of Ugandans.

She added that the leaders will also review on the resolutions that were passed by the past summits putting emphasis on the amendments that were suggested in the Public Order and Management Act (POMA).

Lumumba as well revealed that the summit heads will deliberate on whether to bring on board other political players who are not party to the IPOD establishment.

“In the spirit of cohesion, as IPOD council we agreed that we should bring on board other political actors in the 2021 general elections such as the National Unity Platform (NUP) party, People’s Progressive Party (PPP) and presidential candidates for dialogue but this will be decided by the summit,” Lumumba said.

The DP Secretary General, Gerald Siranda noted that the party is committed to dialogue and the party President, Norbert Mao will attend the summit as scheduled.

“DP would be the last to quit dialogue, we can’t depend on masses in the house since we don’t have them and we can’t go to the bush because we don’t believe in doing so; talking is civil and it’s only when leaders engage that we can handle the key issues in our country,” Siranda committed DP.

Both UPC and JEEMA committed to attend the dialogue however FDC has since revealed that they won’t attend the summit and will officially write to NRM the current chair explaining why such a decision has been taken.