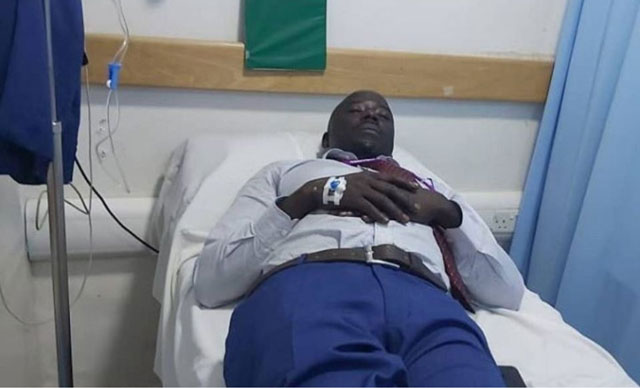 The Aruu County Member of Parliament, Odonga Otto was rushed to Nakasero hospital this afternoon after allegedly being punched by his Kilak North counterpart, Anthony Akol.

The two legislators exchanged blows at parliament over claims that Otto was telling Akol’s voters to eject him from the house for selling their land in Amuru to government.

The two legislators charged at each other as Akol was escorting a group of his electorate that had just visited him at parliament.

Eye witnesses say Akol confronted Otto around the pigeonhole area and asked him why he was decampaigning him. Akol reportedly warned Otto that if he kept on accusing him, he would act badly.

It is alleged that Otto didn’t deny the allegations insisting that indeed Akol sold the land, prompting Akol to punch him. The Gulu Municipality MP, Lyandro Komakech quickly intervened to stop Akol.

It is here that Otto was rushed by Parliamentary Ambulance to Nakasero Hospital.

Gilbert Olanya, the Kilak South MP who was at the scene during the fight, says he doesn’t know what exactly started the fight but said Otto was out of danger.

Okin PP Ojara, the Acholi Parliamentary Group Chairperson, says it is very unfortunate for the MPs to have clashed physically.

He says they will sit down and try to resolve the matter between the two legislators and ensure that such an incident never happens again.

By the time of publishing this story, Olanya who was with Otto at the Hospital, said they would be discharged soon.

Attempts to speak to Akol were futile as he was attending plenary and promised to get back to URN later.

This isn’t the first time that MPs are fighting in parliament. In 2017, the Ayivu County MP, Bernard Atiku fought with his former Arua Municipality counterpart, the late Ibrahim Abiriga over insults.