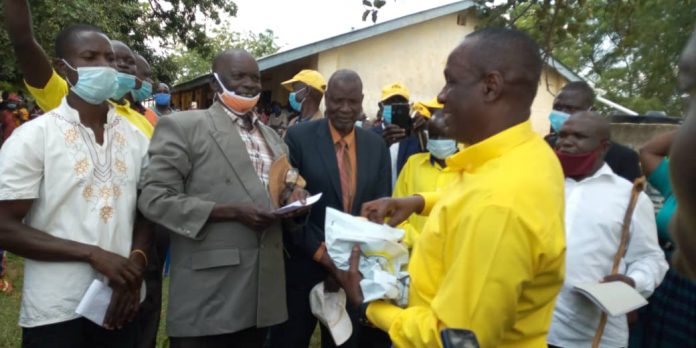 The National Resistance Movement (NRM) Vice Chairperson Eastern Region, Capt. Mike Mukula has maintained that all the people that have since defected to NRM from FDC are genuine opposition members and leaders.

Mukula who is on a mobilization campaign in the Eastern region was responding to claims made by the FDC party Spokesperson, Ibrahim Nganda who accused him of parading NRM vigilantes as defectors as well as printing fake FDC cards.

Ssemujju allegedly accused Mukula of using the defectors as away of duping President Museveni to give him money since he now runs no business.

“We take note, you have seen Mike Mukula everyday parading people who are holding brand new FDC cards and some wearing T-shirts yet we have not printed T-shirts of recent. We have learnt that Mukula has printed FDC cards from Nkurumah road and T-shirts from Industrial area,” Ssemujju claimed.

Responding to the allegations, Mukula noted that all the people that he has so far paraded are genuine opposition leaders who run on the FDC ticket and other opposition parties in the last general elections.

While meeting NRM leaders from Bukwo and Kapchorwa at Noah’s Ark Hotel, Mukula presented the former FDC flag bearer for Pallisa District Woman MP Catherine Achola as a testimony that its genuine FDC members crossing over to NRM.

He added that the people that have been paraded are all prominent people who actively participated in the last general elections.

“The former Pallisa district Woman MP on FDC ticket Christine Achola standing here today is yet another testimony that NRM is growing from strength to strength; when FDC is chasing their people not wanting to receive them, for us in NRM we are receiving our people and welcoming theirs,” Mukula added.

Mukula is currently on the Eastern region mobilization and recruitment campaign as he eyes reelection for the position of the NRM Vice Chairperson Eastern region for another term.