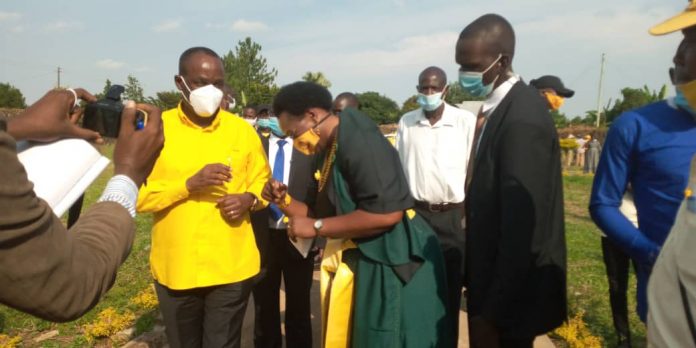 The incumbent NRM Vice Chairperson Eastern Region, Capt. Mike Mukula has advised NRM leaders and members in Teso subregion to always work towards unity for effective development of their region.

Mukula made the call following a resolution passed by the party leaders endorsing him as the sole candidate for the position of the party Vice Chairman, Eastern region at a meeting that was held at Soroti University.

“The performance of the above eminent persons in the party with in Teso subregion and Uganda as a whole has been outstanding and noted in the following areas of peace, road infrastructure, rule of law and economic prosperity of our people. ” Edeket said while moving the motion.

Mukula welcomed the resolution and assured the people of Teso subregion that he is ready to work with them for the upliftment of their standards of living.

The party boss however warned that the continued infights among members of the same party has cost them alot of opportunities, asking them to disistfrom the same.

He asked them to always work towards build a ng the party and development of their mother- land Uganda.

“On several occasions people from the East have been known for pulling others down. Like president has been appointing many of our colleagues in government but its our own brothers who always pull them down.” Mukula advised members to avoid such bickering.

So far, two people have expressed interest to unseat Mike Mukula and these include, Robert Ekongot and Tanna Sanjay.

The party shall convene a National Conference on 7th and 8th August on which they will electing the top party leadership.