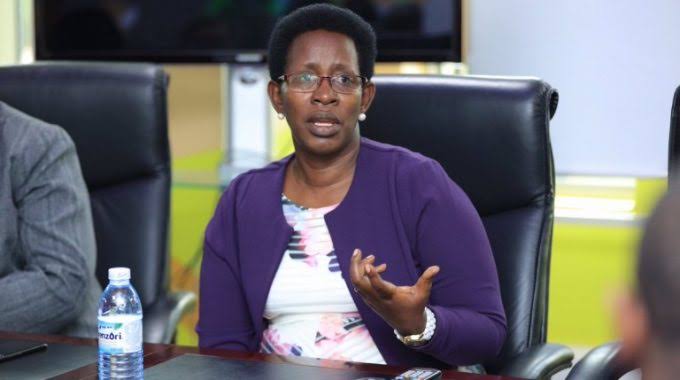 The Permanent Secretary, Ministry of Health, Dr. Diana Atwine has clarified on the donation of empty Jerricans that was given by Coca cola beverages Company.

This contribution of 467 empty jerricans was announced by President Museveni on Wednesday while reading contributions that have so far been made by several members of the public and companies towards the fight against COVID-19.

Coca-Colas contribution was however not well received by majority of Ugandans who lashed out at the Namanve based company saying the donation was too little given the latters big brand.

However, on Friday, Dr. Atwine came out and clarified that this wasnt the first donation that was given by Coca cola noting that the company has been supportive eversince the outbreak of Corona virus in the country.

Coca-cola was one of the first company that came to our rescue when we needed items like water, water containers for our quarantine people. They have been donating to different entities of government including $22,300 to OPM (Office of the Prime Minister), Dr. Atwine twitted.

This position has since been confirmed by Coca-cola the companys Public Affairs and Communications Director Simon Kaheru who said that since March 22, 2020, they have been actively involved in the pandemic fight and the jerricans donation was an additional contribution to the cause.

As a business and as responsible citizens we are fully committed to doing everything we can to help in the fight against COVID-19. Since March 22, The Coca-Cola Company and its bottlers have cut commercial advertising across all brands and redirected this expenditure to amplify health awareness amongst the general public, Kaheru said.

Kaheru noted that in Uganda, the company introduced hygiene and safety messages on the labels of some of Rwenzori and Coca-Cola products which are now available on the market as a refreshment but with a hygiene and safety reminder.

He also said Coca-Cola Beverages Africa and The Coca-Cola Company are working with NGO partners to support Covid-19 relief responses in Uganda and that they are finalizing an arrangement with the Uganda Red Cross Society to implement community interventions countrywide to benefit the most vulnerable people in the community.

We are donating water and sanitizer to vulnerable communities. Coca-Cola Beverages Africa contributed 30 cartons of Rwenzori Water for the Mandatory Quarantine Centres on the first day they were set up and we have since contributed 20 additional cartons. We have also set up equipment to make and provide hand sanitizer which we are making available to a segment of the community starting with our employees and their families, and our distribution partners, Kaheru said.

Plus, we are also helping to set up handwashing stations. In this regard, Coca-Cola Beverages Africa contributed the 187 jerricans for emergency handwashing stations at the border points in the first week and has now contributed 467 jerricans, actually, given to the Directorate of Immigration and Citizenship Control & MoH. The first lot was to begin controlling the possible spread of COVID-19 through border points. He added.