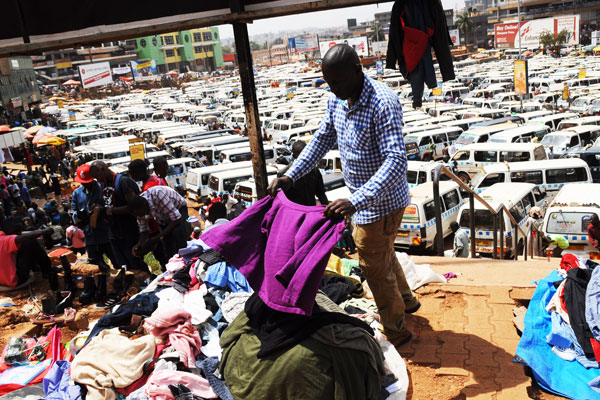 The Uganda National Bureau of Standards (UNBS) in line with Uganda standards US EAS: 386:2005 and US EAS: 356:2004, has suspended the importation of second hand footwear and clothes in a bid to curb the spread of corona virus, and to uphold the many measures put forth by the president of Uganda.

This is on the presumption that those products, however minimal the effect they may have on the spread of the virus, may jeopardize the efforts of the government to avert this pandemic.

According to a report “Fostering a sustainable agro-industrialization agenda in Uganda” that was published by the Economic Research Policy Center, imported textiles contribute up to approximately $137 m to the import bill of Uganda.

This implies that the move will not only have an impact on the dealers in these products, but also on the countries imports.

It is true that there are health risks involved in using second hand products, therefore the suspension is indeed a proper measure, given that the virus is resilient enough to last a couple of days on surfaces like clothing.

In addition, the move is a good way of boosting the textile and leather industries in the country and increasing the share of manufactured exports. This could transition into an industrial bloc through a higher level of production quality and manufacturing practices and create employment opportunities for many of the country’s people in the textile factories in the long run. However, the suspension on the clothes and footwear is limited to second hand, which leaves room for importation of new clothes and thus huge competition for any locally made products.

Given that once upon a time, Uganda was one of the best cotton producing countries in the whole of Africa but has since slept; the industry is revivable by this move. Of course, there is a greater need for the country to promote industrial policies for example communication, infrastructure, power supply, tax relief for factories and export incentives for the desired results.

This impact is feasible only in the event that this suspension carries on for long or there is an indefinite ban.

First, an estimated 15,000 people will be out of business given that most people who deal in clothes and footwear in Uganda deal in these second hand products. All these people are likely to go out of business.

Secondly, new clothing and footwear is less affordable than second hand clothes and footwear. This will leave the low income earners struggling to afford proper clothing in the long run.

Further, the government is likely to lose a large amount in revenue annually due to this ban.

The success of this suspension will largely depend on what policies the government puts in place for this transition and consequently the implementation process.