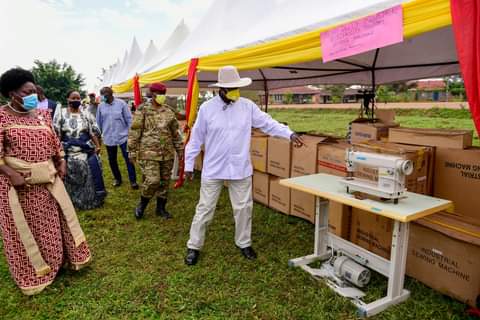 Over the weekend, President Museveni presided over the delivery of state-of-the- art Business start-up tool kits to a total of 3228 youths and women under the Green Job Program in Kamuli District.

This was at a function organized by the Ministry of Gender that runs the Green Job Program and the Speaker of Parliament Rebecca Kadaga.

According to the Ministry of Gender, the Improving Labour Productivity and Competitiveness Project seeks to establish a National Productivity Centre which will coordinate and spearhead productivity, measurement, research and dissemination.

Speaking during the event, the Speaker Rebecca Kadaga asked President Museveni to provide Shs280b to support the Ministry of Gender in implementing a number of programs that would support youth and women come out of poverty.

Kadaga requested that a sum of Shs50b be made available for Green Jobs Programme, Shs30b for the National Apprenticeship and Graduate Volunteer Scheme, Shs30b for the Uganda Green Incubation Project (UGIP) – Songhai Model, Shs100b Jobs for Urban Youth (JOY), Shs20b for Access for Labour Justice and Shs50b for improving labour productivity.

“Your Excellency, I ask you as the Minister Finance, because you are the Minister of Finance, that in the next financial year, you send [Matia] Kasaija to put for us this money, I can confirm that it works, “Ms Kadaga said.

Responding to the Speaker’s plea for more funding to these key programmes, President Museveni said that the Speaker was right to call for money to be injected into programmes that eradicate poverty and not salaries.

“I thank Ugandans for remembering the things that make money and getting out of sleep. Everyone now has an urge to be involved in making money-which is good. I am happy that the Speaker is saying that we add money in these projects of eradicating poverty. Previously, some leaders were saying that we put money in salaries and other things but we are now saying the same thing that money should be put in infrastructure and projects to eradicate poverty,” Museveni said.

The groups that benefitted from the second cohort directly employ over 5000 people and the support that was provided will increase the productivity and profitability of these businesses, increase business growth and contribute to employment creation.