Meanwhile, thank you all for the overwhelming birthday wishes on the 22nd April. I tried to read all but eh, I failed…Mwebale!

Well, that’s not the main reason am posting something on my timeline today, Nedda! Something has been making me very mad.

In the last 2 months, I have been engaged in very many meetings mainly on Zoom. These meetings have been with all types of people and they can often be discouraging sometimes. But somehow, am invited.

Many Ugandan ‘experts’ seem to be very good at identifying what cant work. Guys will talk and talk but leave you without a hit on solutions and interestingly people will clap.

The reason I have been pushing the above idea is because I have so many friends who are pilots with Kenya airways. Quite a number have their sons and daughters doing motocross. My children’s ridding opened those doors for me.

We have a chat group that discusses our children’s education, motocross etc and their other many dreams but I also get to know what’s happening in their work life. So I ask often where are you? I ask leading questions to simply learn.

Right now, Kenya airways is transforming or Using passenger planes for cargo work. Below is a dream liner in the picture. They are taking cargo to South Africa, Dubai, China, Netherlands and the UK. 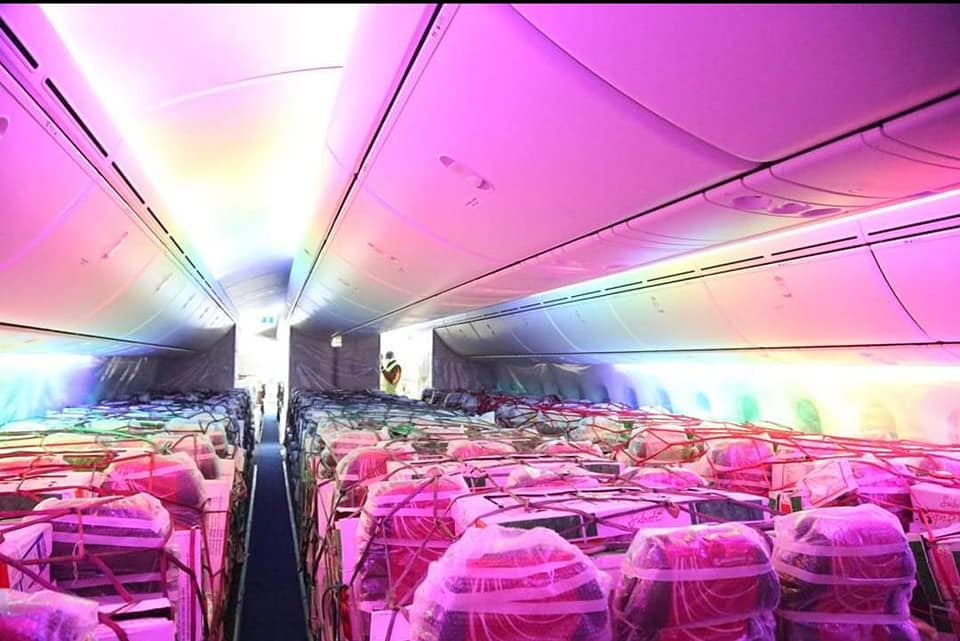 The cargo is mainly meat, flowers, fruits and vegetables and they return with some cargo as well though the focus is mainly. From every source I have had chat with, the demand for food is crazy, very crazy.

A top Kampala businessman who follows my Facebook page called me yesterday and said, his sons studying in the UK were so excited to be able to buy chicken this week but they decided to go vegetarian. It chicken cost up to 12 pounds.

Today morning, I was invited for a zoom meeting which had many people and wasn’t able to air my views. Normally I fight my way into being allowed to speak but I decided to simply listen again. A number of people tell the minister of Finance now farmers don’t have market for the produce.

My heart was disturbed again. Even one of the minister said, he wanted to sell 50 cows but they were only offering ugshs 3000 per kilo. Let me have my cows on the farm instead. I thought about the big markets out there and the 4 Uganda airlines planes on tarmac in Entebbe and 2 of cargo.

The hotels and restaurants buy massively agriculture products because of tourism both domestic and foreign . Now that they are closed, eggs for example have gone down from ugshs 16k to as low as ugshs 6k.

What shocks me though is that in every meeting, people are suggesting borrowing of money from all types of lenders. We are very vulnerable right now, borrowing as the only solution can only kill us as a country. The higher the number of cases of corona then more people will want to lend us.

If we want to talk political independence like we normally do, we must never forget to talk economic Independence. The two work in tandem according to common sense. Okay, for Kenya airways, it’s the private sector who pushed Kenya airways to do.

The private sector in agriculture especially middlemen, look for very little earnings and without knowledge of the vast market outside our borders. Interestingly though, a few have held me in suspicion. Oh, this isn’t tourism but it’s agriculture and you are no expert.

Kenya airways had only 2 cargo planes 737s and yes, corona has opened their eyes. Kenya airways will get more cargo planes because of the value they are seeing now. This Kenya you see has 4 banks operating in Uganda. Corona shouldn’t block our thought process.

Our fortunes as a country will only change when we change our type of conversations( for both the rulers and the ruled)…….industrialization and Oil are a very long shot for us as a country. Agriculture and tourism are our lowest hanging if we want to participate in international trade positively.

My media buddies, let’s fight to make sure those planes are loading agriculture products to the markets out there.