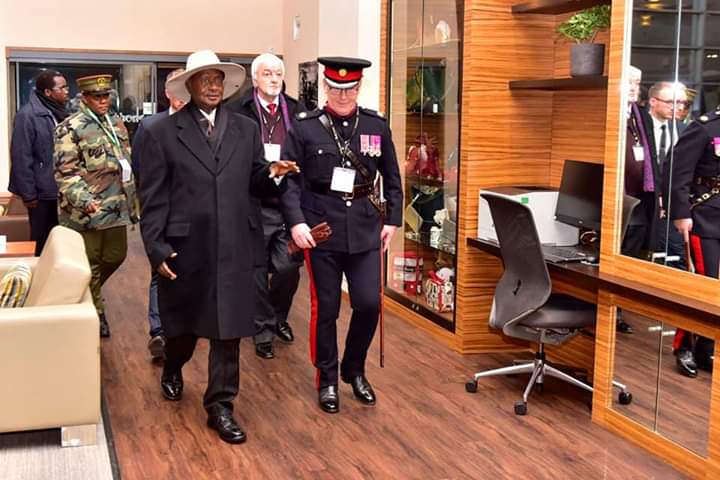 Museveni who is in company of Foreign Affairs Minister Sam Kutesa, Finance Minister Matia Kasaija, investments Minister Evelyn Anite among others said the ruling National Resistance Movement government is committed to attracting more investment to Uganda, “now that most of the crucial infrastructure is in place.”

The event will bring together at least 20 African Heads of State, business leaders and their international counterparts as well as Ambassadors and High Commissioners in the UK.

President Museveni is also expected to hold bilateral and multilateral meetings that will galvanise support for Uganda in terms of economic growth and accelerate job creation to youths.

The first ever summit will be hosted by British Prime Minister Boris Johnson.

The crucial meeting marks a major milestone in the UK’s push to become the largest investor in Africa.

Africa, a continent brimming with investment opportunities, is home to six of the ten fastest-growing economies in the world.

The Summit will bring together businesses, governments, and international institutions to showcase and promote the breadth and quality of investment opportunities across Africa.

The one-day event, co-organized by the Royal African Society and Oxford Brooks University, will see the participation of UK parliamentarians, academics, and policymakers.

The future trade relationship between the UK and Africa and the African Continental Free Trade Area in the context of Brexit are expected to top discussions.

Africa and the UK are long-standing partners. Trade stood at over £33bn in 2018. Close to 2,000 British businesses currently operate in Africa.

Over the next decade, Africa is expected to play an increasingly significant global role. The continent’s population is projected to double to 2 billion people by 2050, representing a quarter of the world population.

The UK-Africa Summit is a unique opportunity to expand investment and trade opportunities.