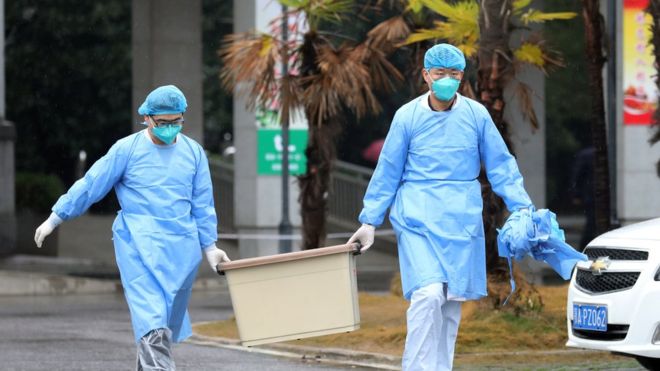 A fourth person in China has died from a new virus that has spread rapidly across the country, as authorities confirmed that it can be passed from person-to-person.

A 89-year-old man was the latest victim of the new strain of coronavirus, which causes a type of pneumonia.

He lived in Wuhan, the city at the centre of the outbreak.

More than 200 cases have now been reported across major cities in China including Beijing and Shanghai.

China’s National Health Commission on Monday confirmed that two cases of infection in China’s Guangdong province were due to human-to-human transmission.

In a separate statement, the Wuhan Municipal Health Commission said at least 15 medical workers in Wuhan have also been infected with the virus, with one in a critical condition.

All of them are being kept in isolation while being treated. The disease was first identified in Wuhan, a central Chinese city of 11 million people, late last year.

There are currently 218 confirmed cases of the virus in China, according to the World Health Organization (WHO).

A handful of cases have also been identified abroad: two in Thailand, one in Japan, and another in South Korea.

Those infected had recently returned from Wuhan.

Airports in Singapore, Hong Kong and the Japanese capital Tokyo have been screening air passengers from Wuhan.

Australian authorities have also announced that they will begin screening passengers coming from Wuhan to Sydney.

China is the largest source of tourists to Australia, with more than 1 million people arriving last year. There are fears that the virus could spread swiftly – and further across the country – as millions of people across China prepare to travel home for the Chinese New Year holidays later this week.

These travel plans could also mean that authorities will not be able to monitor further spread of the disease.

And experts say there already could be many cases going undetected.

A report by the MRC Centre for Global Infectious Disease Analysis at Imperial College London suggested there could be more than 1,700 infections.

However, Gabriel Leung, the dean of medicine at the University of Hong Kong, put the figure closer to 1,300.

The outbreak has revived memories of the Sars virus – also a coronavirus – that killed 774 people in the early 2000s across dozens of countries, mostly in Asia.

Analysis of the genetic code of the new virus shows it is more closely related to Sars than any other human coronavirus.

The virus, known also as 2019-nCoV, is understood to be a new strain of coronavirus that has not previously been identified in humans.

It is believed to have originated from infected animals at a seafood and wildlife market in Wuhan.

Coronaviruses are a broad family of viruses, but only six (the new one would make it seven) are known to infect people.

The World Health Organization has advised people to avoid “unprotected” contact with live animals, thoroughly cook meat and eggs, and avoid close contact with anyone with cold or flu-like symptoms.