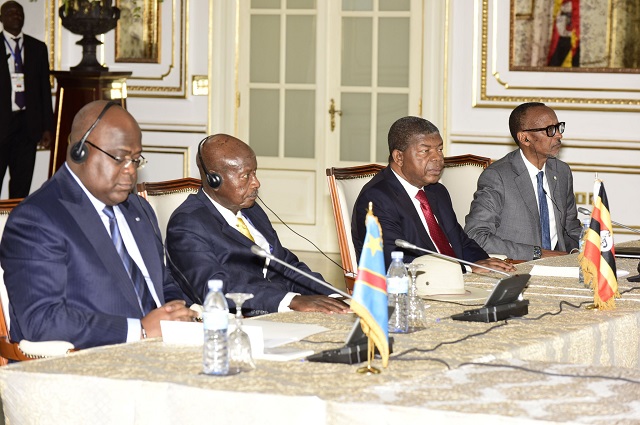 Rwanda and Uganda have agreed to refrain from engaging factors that may create the perception influencing a regime change in each other’s country and also exchange prisoners.

This was resolved in the Luanda Head of States meeting set up to resolve the tense relations between Rwanda and Uganda which has now marked a year.

In the quadripartite summit held on Sunday in Luanda, Angola and attended by President Yoweri Kaguta Museveni, Rwanda President Paul Kagame and mediators João Lourenço, the President of Angola and Felix Tshisekedi, the President of Democratic Republic of Congo, it was agreed that the two warring nations release prisoners being held in their country, but also that they refrain from interference.

“Both parties must refrain from all the factors that may create the perception of supporting, financing, training and infiltration or destabilizing forces in their neighbors territory,” reads the communication.

The meeting also decided for the continuation of the activities of the Ad-Hoc commission, as a mechanism for monitoring the implementation of the process.

The summit also resolved to hold the next meeting at the closed common Gatuna border between Rwanda and Uganda on 21st February.

President Museveni and President Kagame welcomed the efforts of the heads of states of Angola and DR Congo in the search for a peaceful solution in the Spirit of Pan Africanism and regional integration to resolve disputes between the two.

The Republic of Uganda and Republic of Rwanda have pledged to continue to prioritize permanent dialogue between the two countries for the development and well being of their people.

It is the second time Kagame and Museveni have met to resolve the dispute.Rwanda has accused Uganda of arresting and torturing its citizens, and also alleged that Uganda was supporting anti-Kigali groups that were planning to destabilize the nation.

Uganda denied the accusations and instead said Rwanda had infiltrated her security agencies.