Ugandan Manufacturers and producers under the Uganda Manufacturers Association (UMA) have expressed disappointment in the failure by government to take action and resolve the unfair trade practise by Kenyan counterpart who have continued to block Ugandan products from entering their market.

These led by UMA Executive Director, Daniel Birungi told the media at their offices in Kampala that at a glance, Uganda’s trade with Kenya is down to a trickle.

Birungi said that Uganda has over the years been a supermarket for Kenyan made products, since the colonial days and Kenya has always benefited from both access to cheap Ugandan raw materials and fresh produce for their agro – processing industry and market for finished products.

However, due to several government interventions and programs such as Buy Uganda Build Uganda (BUBU), this has changed and now Ugandan Manufacturers have built capacity to produce high quality products.

“The EAC Common Market guarantees unfettered free movement of goods and services. However, the Republic of Kenya has completely ignored the EAC Common Market commitments and has wantonly barred Ugandan goods into Kenya, for a number of unjustifiable reasons,” Birungi said.

The UMA boss noted that these reasons include; questioning the Origin of Uganda’s products even those with valid certificates of origin;

“There are a number of baseless claims that products from Uganda are counterfeit notwithstanding such products bearing Q mark issued by Uganda National Bureau of Standards, Claims that goods from Uganda are smuggled into Kenya hence evading taxes among others,” Birungi said.

He noted that despite all the claims and the frustration that the traders go through, Uganda registered the highest number of exports to Kenya in the 2017 which has since seen Kenya react by blocking Ugandan goods.

The products that have been greatly affected by Kenya’s actions include: Milk, Sugar and Gas cylinders which areas Uganda has a competitive advantage. 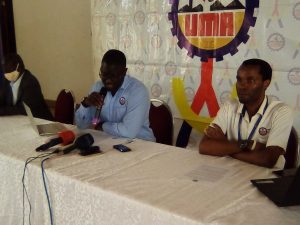 In January 2020, the Ugandan Government issued a Protest Note against the blantant disregard of the EAC Common Market commitments but to date it remains un-replied.

“Prior to that, there has been every effort at the level of Heads of States to resolve the trade issues between Kenya and Uganda, with minimal success since Kenya has consistently breached on commitments while Uganda continues to play second fiddle. The situation has since reached worrying levels warranting tough measures to address trade issues in EAC otherwise Uganda is doomed,” Birungi said.

UMA has thus called upon government to have the issues resolved for trade to go back to normal before Christmas failure to which they may be pushed to call for tougher measures including calling for boycott of Kenya products in Uganda.