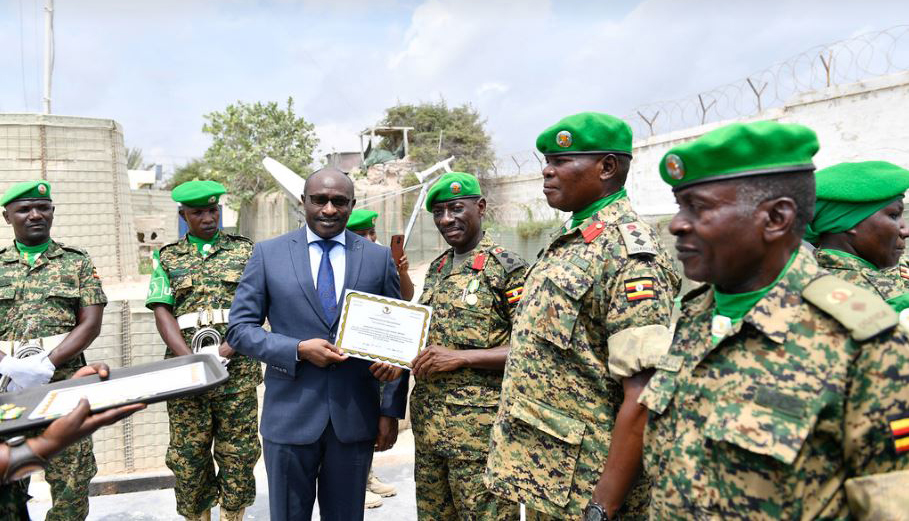 Uganda People’s Defense Forces Battle Group xxvi is back from Somalia after completing their tour of duty.

The troops numbering about 2,256 soldiers have been received from Somalia at Peace Support Operation Training Center in Nakaseke district on mission of maintaining peace and stability in Somalia under AMISOM.

AIGP Brig Gen Jack Bakasumba who was the guest of honor on the behalf of Chief of Defence Forces, Gen David Muhoozi, appreciated battle group 26th for having honorably represented Uganda in a noble Pan African cause in Somalia.

Brig Gen Bakasumba however, warned soldiers against spending their savings on non-essential stuffs, rather than establishing memorable ventures that will act as memories for their participation in maintaining peace in Somalia.

Brig Gen Bakasumba also accredited the high levels of discipline which was exhibited by battle group 26th in Somalia.

According to Uganda people Defence forces legacy for soldiers after the completion of the mission to undergo for a two weeks post-mission guidance and counseling, as Col Bonny Wolimbwa the Commandant Peace Support Operations Singo explains.

This battle group was commanded by Col Tofa Magino, in conjunction with Uganda’s Formed Police Units in Somalia and other partners under AMISOM’s and it was held at Peace Support Operation Training Center (PSO-TC) in Nakaseke district since December last year (2019)

As UPDF welcomes battle group 26th from Somalia, battle Group 30 is at its final stages of its pre-mission training as UPDF is still recalling reservists to form the 31st and 32nd battle group