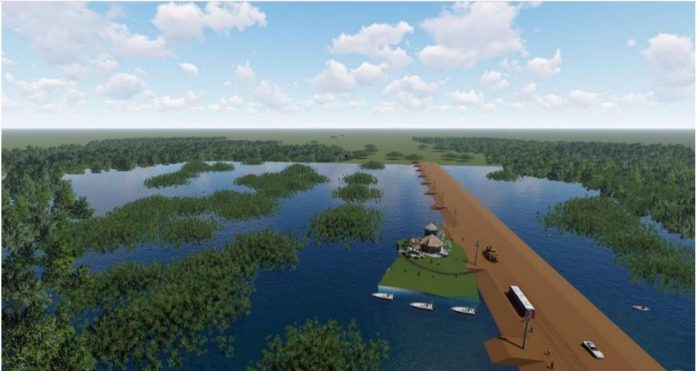 A wooden canoe from Nakiwogo land site or through Kasanje Town Council at Mabamba bay is the starting point for anyone visiting the island which is home to over 50,000 people. Although there is a distance of approximately 2.5 kilometers from the mainland to the island, crossing to either side takes over three hours and costs Shillings 30,000.

Eng. Samuel Mwesigwa, the Wakiso District Engineer, says the district has been carrying out geological and hydrological studies and consultations since last year, which show that it is possible to put in place the road infrastructure. Eng. Mwesigwa notes that they have benchmarked from a similar project in Mpigi District connecting to Bunjako Island, which is at the same length and same geology with Bussi.

Maura Atwongerwe, the Managing Director Atoria Civil Lab, which arried out the Geotechnical investigations notes that they have found that the soils in the area are strong enough to hold an embankment but need adequate construction period to prevent sectional failures in the future.

“As evidence of this, the Bunjako island embankment crossing has been stable but there are sectional failures caused by the method used and materials, which makes the road expensive to maintain,” said Atwongerwe. However, Esau Mpoza, the Wakiso District Environment Officer, says the geotechnical findings are not enough to tell whether the road has received green lights.

He notes that the proposed road is situated in a very sensitive area, which has also been identified as a wetland of international importance, adding that if anything is to be done, it must be with detailed mitigation measures. Mpoza says that he has already submitted his views to the National Environment Management Authority-NEMA, which is currently reviewing the environmental impact assessment report of the project.

Eng. Mwesigwa says the difficult phase towards the actualisation of the project is resource mobilisation. Currently, Wakiso District annual road budget stands at Shillings four billion, which means they need ten years to achieve their desire at the expense of all other projects.

Eng. Mwesigwa says they have agreed to start with the little funds they have as they continue lobbying. He says the district is considering entering into the public-private partnership since there might developers interested in the project.

Stanely Kabuye, the Bussi Sub County LC 3 Chairperson observes that if the road is to be constructed, it should begin from Bussi to enable his people benefit. He says the island has all the necessary materials needed for road construction including murrum and hard cores among others.

Mwesigwa notes that he would also like to start the construction from Bussi due to the availability and proximity of resources. Last year, Wakiso district Authorities considered affirmative action for Bussi Island, which is one of the hard to reach areas in the district despite its huge tourism and mining potential.

The lack of transport means Bussi residents cannot access social services such as schools, health and banking among others. Despite the hardship, the island is covered in the mellow sound of birds and often attracts tourists. The island is a home to the famous shoebill storks and several other bird species among them the long-tied lapwing, kingfisher, village Weaver and African Jacana.

The project is also proposing to put up several raised bird watching towers to spur tourism in the area. The anticipated road construction has also seen several investors putting up recreation grounds, hotels and beaches. Surprisingly land in this area is becoming more expensive with an acre going for Shillings 50 million.