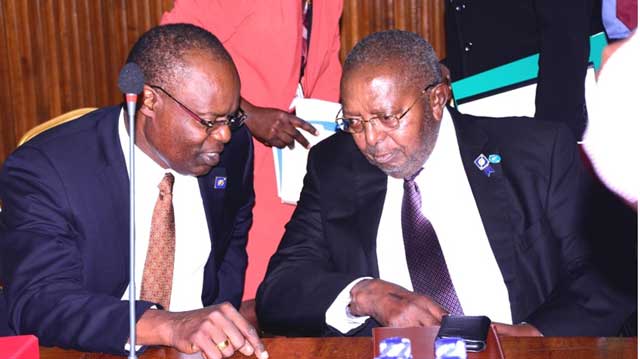 The Finance Committee of parliament has approved a request to recapitalise Bank of Uganda with Shillings 481billion in the 2020/2021 financial year.

This is part of the recommendations in the Committee report on the National Budget Framework Paper on votes in the finance sector.

In his presentation on Tuesday evening, the Finance Committee Chairperson, Henry Musasizi explained that the Bank of Uganda Act, 2000 provides that government is authorized to issue securities for recapitalising BOU where its capital impaired.

Musasizi also noted that recapitalising BOU wouldn’t be done through appropriation of cash from the Consolidated Fund but rather from the securities issued by the treasury.

He revealed that both the Finance Ministry and BOU informed his Committee that the capital impairment arises from income that is substantially lower than expenditure. Most of BOU’s capital is from interest earned on international reserves, which have been low since the 2007/2008 global financial meltdown.

“To raise international interest income while limiting risk exposure, the bank holds most reserves in the USA where interest rates are positive compared to Europe or Japan where they are currently negative,” reads the committee report.

BOU is mandated to among others, maintain price stability, ensure a sound financial system, issue notes and coins as well as maintain an efficient payment system so as to create a stable economic environment that promotes economic growth.

The finance committee noted that in order for BOU to effectively fulfill its mandate, it incurred operating costs amounting to Shillings 686.4 billion in the 2018/2019 financial year.

The proposal to recapitalise the BoU has been a subject of contention in the Budget Committee. On Monday, the Committee halted discussion on the matter citing the need for top management to justify the request. The Committee summoned the BOU Governor, Professor Emmanuel Tumusiime Mutebile and other top managers to appear on Tuesday to explain their request.

However, the BoU officials were no show. The Committee now says it will look into the explanation of the Finance committee and consider other views on the same. Last year, the Accountant General, Lawrence Ssemakula told Parliament that BOU had suffered deficits since June 2013 and thereby needs money urgently to avert an impending crisis.

This was further supported by the Auditor General’s 2018/2019 report, which showed that BOU is under capitalised to a tune of Shillings 671.7 billion. The Auditor General, John Muwanga explains that Section 14 (3) of the BOU Act, 2000 provides that the issued and paid-up capital of the Bank shall be a minimum of Shillings 2 trillion.

However, the Leader of Opposition in Parliament, Betty Aol Ocan has since urged the Budget Committee to reject the proposal for recapitalising BOU. While presenting an alternative National Budget Framework Paper on Tuesday, Ocan expressed concern that BoU has been seeking financial bailouts annually yet it expected to perform better since it is the lead agency of the monetary and fiscal discipline.

The options include among others using savings on government accounts, repurchasing agreements and drawing down General Reserve Funds which stood at shillings 399.2 billion by June 30, 2019. Ocan also noted that the recapitalization request of Shillings 481.7 billion for the next financial year is double that of the projected amounts for sectors of tourism, lands, trade and also ICT and national development.

The above sectors are expected to receive under shillings 190 billion next financial year. The Bank of Uganda Act 2000 states that the authorised capital of the Bank of Uganda may be increased by a resolution of parliament to ensure adequate operations of the bank.