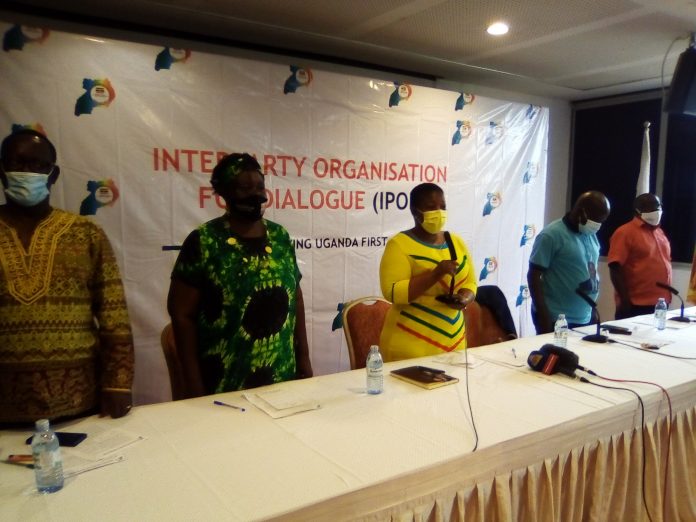 The Interparty Organisation for Dialogue (IPOD) has raised concern over the recent decision by the Electoral Commission to suspend general election campaigns in 14 districts across the country.

On December 26, 2020, the Electoral Commission announced the suspension of campaign meetings in 14 districts including; Kampala, Masaka, Wakiso, Luwero among others over surge in covid-19 cases in such areas.

During their end of year address to the media, IPOD, an organization that brings together all political parties with representation in Parliament noted that EC would have consulted them as stakeholders before taking such a decision.

Lumumba who doubles as the NRM Secretary General said that IPOD has thus written to the Electoral Commission for further engagement on the subject matter.

Among the issues raised by IPOD include how the political players will go about with other non-campaign activities that are critical for elections which involve gathering people such as training of polling agents for the candidates.

“EC should work with Uganda Communication Commission (UCC) and state media broadcasters to ensure equitable access and use of state media by all candidates,” Lumumba said.

Lumumba added that IPOD as well sought for clarity from EC on polling day processes in light of COVID-19 pandemic including the do’s and don’ts at the polling station, biometric identification of voters and the results transmission process among others.

IPOD as well expressed concern over the increasing levels of violence and intolerance among political actors and voters in the on-going political campaigns.

“Since the campaign period started, we have witnessed many incidents of violence and confrontation between security agencies with some political actors that have unfortunately left many lives lost, property destroyed and businesses disrupted. As IPOD we condemn violence in the strongest terms possible,” Lumumba noted.

IPOD has thus called upon all political players to lead by example and walk the talk, offer leadership with the intention of saving lives for a better Uganda in future.

The leaders have appealed to the security agencies to desist from using excessive force and exercise restraint in accordance with their profession even in the face of provocation by the political actors, citizens and fellow security officers.