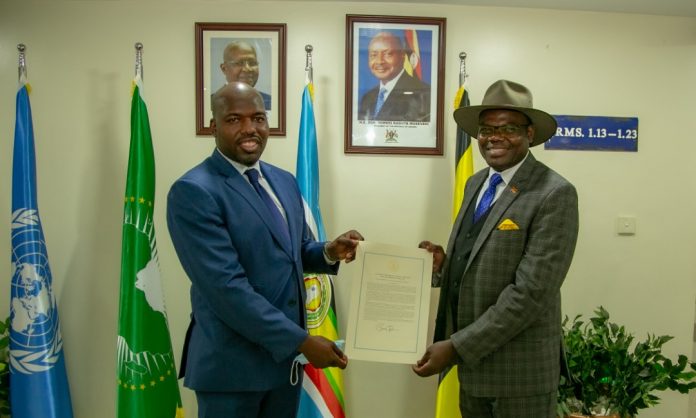 David Anderson the Chief Executive Officer (CEO) of Anderson Royal Industries an American based private and public holdings company is in the country to take up investment in Uganda’s Real Estate Industry and the Agriculture sector.

The former Advance and Presidential Personnel to the US’ President Barack Obama was ushered into the country by Isaac Kigozi the Managing Director, East African Partners (EAP) a company that markets the region as an investment destination.

Anderson said that he has come to Uganda to secure his future as a response to the call that was made by President Museveni to all African Americans to return to their cradle land to take up investment and settlement following the brutal treatment against AfroAmericans last year.

“I came to Uganda to secure my future, it should be to no surprise that after the 2020 murders of AfroAmerican men and women in the US who are treated as second class citizens even when you rise to your full potential and create wealth,” Anderson said.

Anderson said that Uganda being a Developing country with a good Social, Economic and Political environment, it poses a lot of opportunities to any investor across the globe.

While meeting with officials at the Ministry of Foreign Affairs, Anderson said his company which holdings 15 companies with a net worth of $101Million will take up investment in other areas of interest.

“We have got a range of businesses dealing in Software Technology, Real Estate, Commodities Trading, Logistics, Advanced Medical Technology and Virtual Education and we would wish to establish the same in Uganda,” Anderson said.

He noted that, “To begin with, we shall take up investment in the Agriculture sector by engaging in Agro-processing and Value addition as well as Real Estate. For the start, we are looking at invest between $10m to $20m for a period of five years.”

The Ministry Head of Diaspora Affairs Department, Amb.Dickson Ogwang appreciated Anderson for yielding to the call of returning home to take up investments, develop and equip Ugandans with new skills.

Ogwang noted that his office will coordinate the different departments and Ministries in the country to ensure that Anderson is granted all the support he needs to establish his company in the country.

He commended Isaac Kigozi, the Managing Director, East African Partners (EAP) for his continued effort towards encouraging investor into the country which in the long run has worked to improve Uganda’s economy.

During the meeting, the Senior Presidential Adviser on Diaspora Affairs, Amb. Abbey Walusimbi welcomed Anderson on behalf of President Museveni and assured him of ensuring the success of his investment in Uganda.

“We embrace you on behalf of the President, you are welcome home and we are glad that you have come with all the necessary skills that can be used to transform the lives of Ugandans,” Walusimbi said.