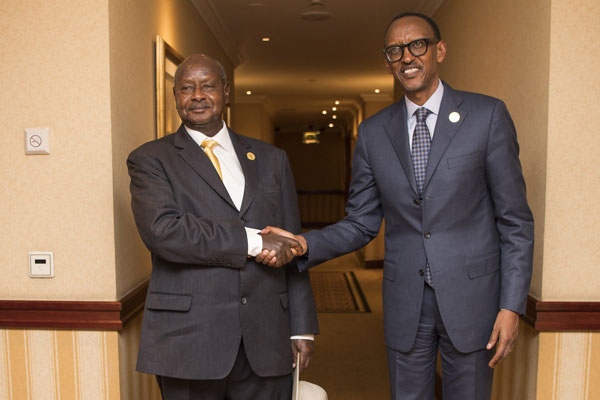 Preparations are underway for the meeting between President Yoweri Museveni and Rwanda President Paul Kagame.

The meeting that will be held on Friday is part of the resolutions of the quadripartite summit held in Luanda, Angola.

During the summit, it was agreed that the two countries release prisoners being held in their country, but also refrain from interference, protection of Human rights of national citizens by both Uganda and Rwanda and continuation of the activities of the Ad-Hoc commission, as a mechanism for monitoring the implementation of the process.

At the No Man’s land at Katuna Border where the meeting is set to take place, the road is being rehabilitated by Uganda National Roads Authority (UNRA).

This was going on as armed Rwandan security operatives were on standby at their side of the border keenly watching.

UNRA workers were also seen opening some of the clogged drainage along Katuna-Kabale road.

Security personnel led by Darius Nandiinda, Kabale Resident District Commissioner were also cited at the border to search for a suitable space where the President could address the residents.

Some of the residents at the border say they are excited about the meeting.

Franco Korinako, Chairperson for Katuna Border Traders Association says that they are eagerly waiting for the meeting between the two Presidents especially.

Emmanuel Wimana, a resident of Byumba in Gigumbi district Rwanda says that the meeting is highly welcome and the moment they resolve to reopen the border it will be a great day for the business community.

Wimana says that he feared to cross back after receiving information that his life could be in danger since most of the people of his category are now treated like rebels yet it is not the case.

Rwanda-Uganda border was closed in February 2019. Rwandan authorities led by the President, Paul Kagame accused Ugandan authorities of abducting Rwandan citizens and locking them up in un-gazetted areas.

They also accuse Uganda of hosting and facilitating dissidents especially from the Rwanda National Congress and the Democratic Forces for the Liberation of Rwanda.