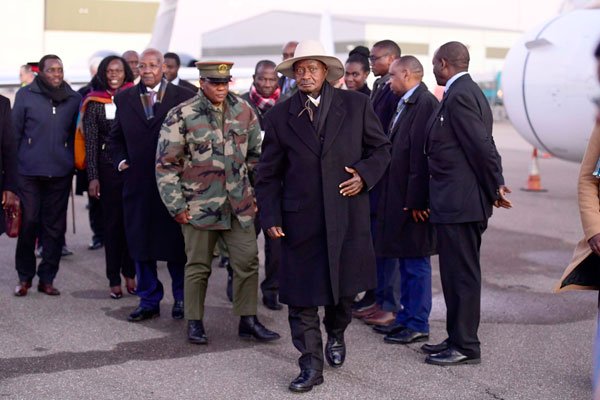 In an interview with the BBC’s Newsday programme, Museveni said African should have intervened militarily and “taught those people a lesson”.

“Libya was an African country being attacked by foreign powers. We should have intervened,” Museveni said.

Museveni was referring to the on-going crisis in Libya in which several Western countries are backing military strongman Khalifa Haftar to fight against the UN-recognised Government of National Accord (GNA) in Tripoli.

AFP reports that since April last year, the GNA has fought back against an offensive by fighters loyal to Haftar, who is backed by Russia, Egypt, the United Arab Emirates, and France.

But Museveni said: “It was a surprise attack. Even me I didn’t believe that anybody could be so stupid to attack an African country that way.”

“The potential is there if Africa wants to chase the invaders we can chase them. We defeated the Portuguese, we fought the Boers who were backed by all sorts of foreign forces,” Museveni added.

On the Libya summit recently held in Berlin to discuss lasting solutions to the crisis in the north African country, Museveni asked: “Who are these people to come and discuss Libya?”

He said he was surprised no African country was initially invited to be part of the summit that was attended by the presidents of Russia, Turkey, France and Egypt, US Secretary of State Mike Pompeo and UN chief Antonio Guterres.

According to AFP, GNA leader Fayez al-Sarraj and Haftar were also there but refused to meet and the conference failed to get the two rivals to commit to a permanent truce.

“I was told the African leaders were not invited. Africa has the potential to counter foreign meddling,” the President said.

Following the meeting, a military commission was formed and is supposed to define ways of consolidating a cessation of hostilities.

The commission will comprise five members each from the UN-recognised government in Tripoli and its opponents loyal to Haftar.

“The members of the Security Council urged the Libyan parties to engage constructively in the five + five military commission in order to conclude a ceasefire agreement as soon as possible,” the Council said, according to AFP.

The military commission is expected to meet in the coming days, according to the UN, tasked with turning an existing fragile ceasefire into a permanent truce as requested by the international leaders in Berlin.

The ceasefire was co-sponsored by Russia and Turkey and has broadly held since it went into effect on January 12.

At the summit, the main countries concerned promised to no longer interfere in Libyan affairs and to respect an arms embargo imposed in 2011 but which has been violated.

At the end of the Security Council meeting, Guterres told reporters that “there’s still a long way to go.”
He said truce violations have not been widespread.

Haftar insists his military campaign is aimed at battling Islamists.

Museveni also blamed Ethiopia and Egypt for taking their conflict over the Nile to be solved by Western powers, whom he referred to as ‘headmaster’.

He said in the event that the ‘headmaster’ fails to resolve the Nile issue, local solutions will be sought.

Egypt and Ethiopia have been embroiled in a conflict over plans by the former to construct the Grand Ethiopian Renaissance Dam on the Blue.

Egypt had even threatened military intervention over the mega hydroelectric project that is expected to greatly affect downstream flows of the Nile River.

Ethiopia announced the project in 2011 at the height of the Arab Spring in Egypt. The GERD is located just after the border with Sudan.

But Museveni said he had written to both countries – Egypt and Ethiopia – concerning the conflict.