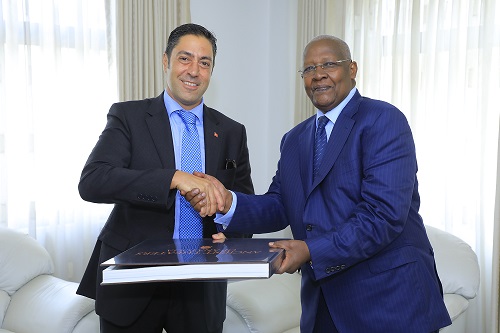 Uganda and Turkey are in advanced talks, for the country to open up employment opportunities for Ugandans. The Turkish Ambassador to Uganda Fikret Kerem is optimistic that his country will start exporting labour from Uganda this year.

The export of labour has become increasingly recognized worldwide as a pro-poor export strategy with significant development impacts especially in the poorest countries of the world according to the Private Sector Foundation of Uganda. By January 2019, Uganda Labour export was estimated to bring into the country up to USD 1.2 billion (about 5.5 trillion Shillings).

Most of these are in the Middle East region comprising the United Arab Emirates, Qatar, Oman, Saudi Arabia, among others. But the Ambassador believes that very soon, many will be heading to Turkey.

He affirmation was made during his second visit to Entebbe, where he is overseeing projects by the Turkish Embassy in Uganda on Saturday morning. During the visit, several Ugandans led by Twahir Khalid Masange, the head teacher of Entebbe Quran Primary School asked the Turkish Ambassador how they could easily get employment opportunities in Turkey.

In response, Fikret Kerem indicated that the country’s labour market is available to Ugandans and that a Labour agreement between the two countries is in the offing. He expects that the agreement will be signed this year in Ankara, Turkey.

Kerem indicated that Turkey desires to have more teachers and house helps. He says all taxes, insurance, and gratuity will be paid for the Ugandan workers.

Currently, Turkey is increasingly inviting its investors to start-up industries for the different country’s brands in Uganda. The Ambassador says Turkey is also educating several Ugandans who will after attaining skills in engineering and production return and be employed in the factories they have started here.

More than 400 Ugandans have so far been trained in Turkey since 2017. Kerem says this will increase sustainable trade between the two countries.